Wolves have caused elk in the Greater Yellowstone Ecosystem to change their behavior and foraging habits so much so that herds are having fewer calves, mainly due to changes in their nutrition, according to a recent study published by Montana State University researchers. 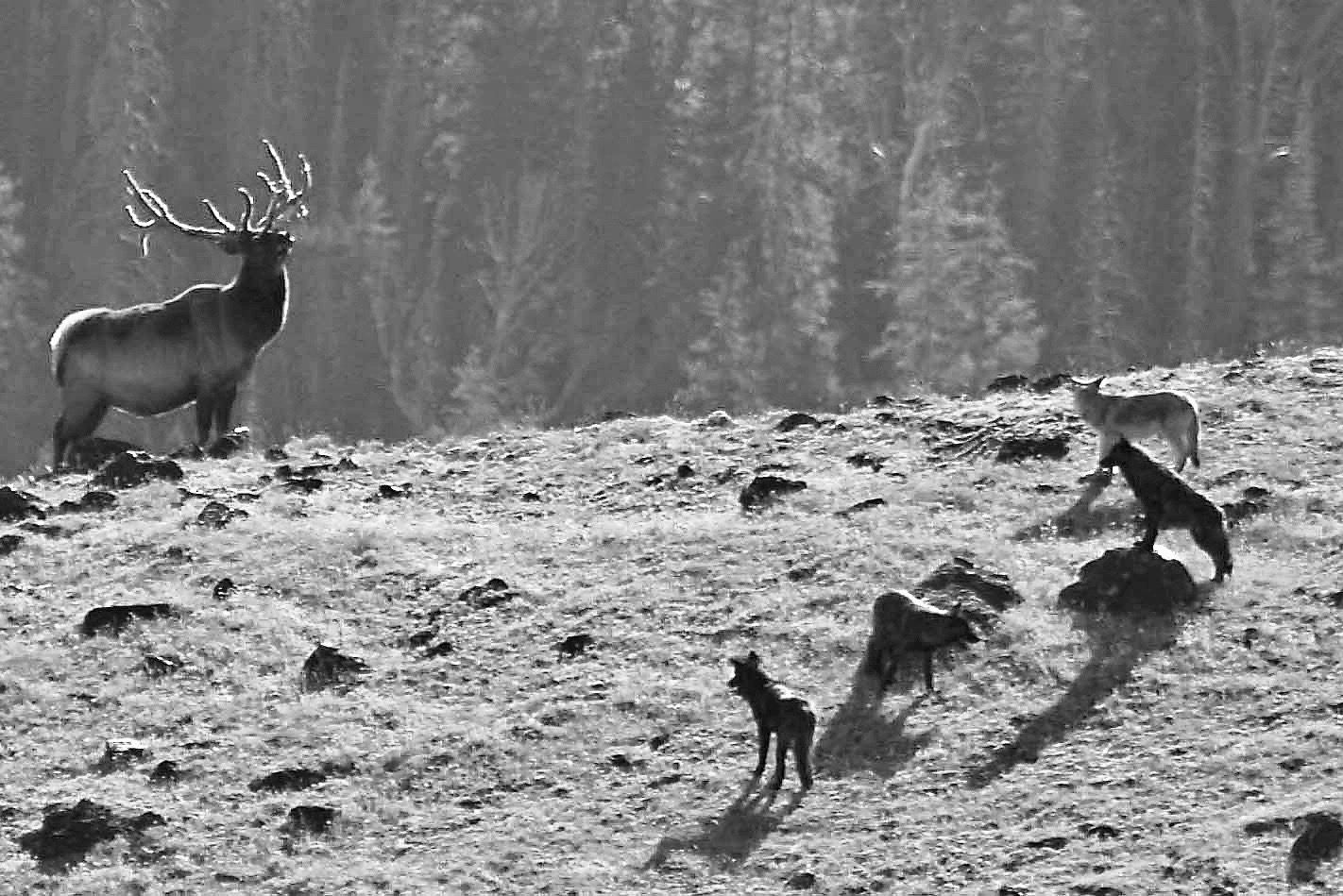 During winter, nearly all elk in the Greater Yellowstone Ecosystem are losing weight, said Scott Creel, ecology professor at MSU, and lead author on the study which appears in the Proceedings of the National Academy of Sciences.

“Essentially, they are slowly starving,” Creel said. “Despite grazing and browsing during the winter, elk suffer a net loss of weight.
With the presence of wolves, elk browse more—eating woody shrubs or low tree branches in forested areas where they are safer—as opposed to grazing on grass in open meadows where they are more visible and vulnerable to wolves.

Browsing provides food of good quality, but the change in foraging habits results in elk taking in 27 percent less food than their counterparts that live without wolves.
“Elk regularly hunted by wolves are essentially starving faster than those not hunted by wolves,” said Creel.

The decline in the Greater Yellowstone’s elk population since the reintroduction of wolves in 1995 has been greater than was originally predicted. In the three winters prior to the reintroduction of wolves, elk on Yellowstone’s northern range numbered roughly between 17,000 and 19,000. In the three winters prior to 2008, annual elk counts had declined to between 6,738 and 6,279.

Obviously, wolves kill elk, and direct predation is responsible for much of the decline in elk numbers, but the rate of direct killing is not great enough to account for the elk population declines observed since 1995 in the Northern Range, the Gallatin Canyon, and the Madison-Firehole herds, all well-colonized by Yellowstone wolves. In addition to direct predation, the decline is due to low calving rates, which are a subtle but important effect of the wolves’ presence, Creel said.
Two studies following radio-collared elk calves found that during the calves’ first six months of life, relatively few of them were killed by wolves, Creel said.

“We knew the presence of wolves caused lower calf-cow ratios, but we didn’t know why,” he said. “Radiocollaring calves revealed that calf numbers were low immediately after the birth pulse, suggesting that a decline in the birth rate was part of the population decline.”
The birth pulse is that time in spring when most cow elk have their calves.

This suggestion was confirmed when the researchers found that elk facing high levels of predation risk had substantially decreased progesterone levels prior to the annual birth pulse. Progesterone is necessary to maintain pregnancy, but a question remained: what was responsible for the decrease in progesterone?
The MSU researchers did chemical analysis of 1,200 fecal samples collected over 4 years, as well as urine samples for the study, and found that elk living in the presence of wolves had lower levels of progesterone, a hormone necessary to maintain pregnancy, than those elk that didn’t live with wolves.

“This research shows that the total effect of a predator on prey numbers can be larger than one would determine simply by looking at the number that are killed,” he said.
Until now, it would have seemed obvious to conclude that a herd losing many of its number to predators would decline faster than a herd where predators were less successful, Creel said.

“However, now it is conceivable that the herd with the lower direct predation rate could decline faster, if it spends more of its time and energy avoiding being eaten and less on reproduction,” Creel said.