You are here: Home / Archives for phenomenon 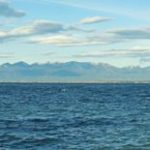 So Large Its Currents Are Influenced By the Earth’s Rotation BY RICK & SUSIE GRAETZ Flathead Lake undulates placidly beneath the Swan Range. Photo Credit: Pano Flathead Lake is the largest natural freshwater lake in the western U.S. (excluding Alaska). Because of its size it is often more like an ocean than a lake. Those of you who have […]