You are here: Home / Archives for gunfight 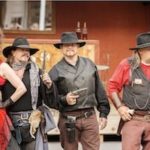 The Cody Gunfight Alleged Shooter of Spectators at Gunfight Show Has Outlaw Record BY RETT NELSON It wasn’t supposed to happen, and the police recently imposed safety guidelines so it won’t happen again, but last summer something went terribly wrong at the Cody gunfight. On July 29, 2016, twelve actors gathered on 11th Street for […]