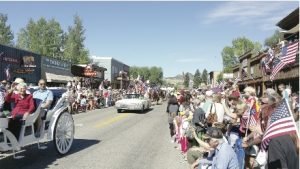 Records of Native Mysteries from the 1800s BY RICHARD IRVING DODGE We have elsewhere remarked that it is difficult for a Christian to draw the line between religion and morality, but unless he can do so, it will be impossible for him to understand the Indian. He must even go further; he must tone his […]

High in the Absaroka Wilderness, It’s Called a Ghost Town for Good Reason BY NIKOLAS GROSFIELD Montana towns—dead or alive—often seem similar to one another. But as with people, debunking this idea only takes a little digging. Independence is a long-abandoned ghost town high in the Absaroka Mountains. Around a dozen miles north of Yellowstone […]

How the Federal Government Encourages Conflict BY SHAWN REGAN 01/06/17 The surprising acquittal of Ammon Bundy and six others in the trial over the armed occupation of the Malheur Wildlife Refuge in Oregon has once again elevated federal land issues to the national stage, and many questions remain. But despite all the media attention on the […]

Hard Lives of Male Domination for Female Indians BY RICHARD IRVING DODGE  (Originally published in 1882) The life of an Indian woman is a round of wearisome labor. Her marriage is only an exchange of masters, and an exchange for the worse, for the duties devolved upon a girl in the parental lodge are generally of the […]

Capturing the Big Sky From High Above BY MARIA WYLLIE Imagine hovering above Yellowstone National Park, and the world’s natural treasures in the most remote areas, where humans rarely travel. Like a bird of prey circling its quarry, you look down upon the landscape, see how it all fits together—from on high, yet close enough to […]