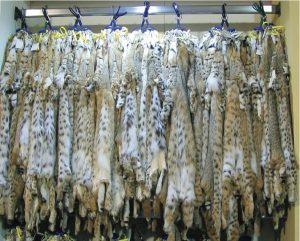 Five years ago, Larry Schultz’s bobcats started killing their kittens due to the constant stress and noise of rolling semis in the Bakken. Now he’s set his sights on a new location in Montana, a potential move that’s stirred up animal rights activists near and far.

Schultz is one of just two large-scale bobcat farmers in North America. For 32 years, he and his wife, Carol, have raised the animals for fur in Arengard, North Dakota—population 115—a dot on the state’s western border, just south of Williston. Schultz is an erstwhile trapper who hated to see skinned beavers go to waste and figured he could raise cats on the recycled meat. He sells his skins to Canadian auction houses, which ship the furs to Russia, China, Japan and Italy. A good fur, speckled with constellations of black spots against a snow-white belly, fetches him up to $1,100.

“I grew up on a farm, and we raised hogs and cattle and sheep and chickens,” Schultz, who currently keeps around 130 cats, told me recently. “It’s always rewarding when you watch something go from little to big. It’s just a different kind of farming, is all it is.”

The last thing Schultz ever expected was international infamy. Yet infamy is what’s been thrust upon him, brought on by the confluence of an oil boom, an environmental review, and a coalition of animal rights activists.

Arnegard sits at the heart of the Bakken region, the sprawling oil patch now yielding a million barrels of crude per day. When production in the Bakken spiked, so did truck traffic past the Schultz Fur Farm. Soon, as many as 25 semis were roaring by his property every hour, raising a racket and kicking up dust. The stressed-out bobcats responded by killing their offspring. (Although Schultz started his farm with wild-caught stock, today all his cats are born in captivity.) Forty percent of his kittens were slain by their mothers.

Schultz decided it was time to flee the Bakken and move to central Montana’s Fergus County, far from the tumult of the oil patch. On June 18 of this year, Montana Fish, Wildlife & Parks completed a pro forma environmental assessment and recommended that Schultz receive a license to operate his relocated farm. The state then opened the assessment to a public comment period—and the fur hit the fan.

The comment period quickly turned into a referendum not on the environmental impacts of Larry Schultz’s bobcat farm, but on the ethics of farming animals for fur. Thousands of comments poured in, some from places as far away as New Zealand. A petition demanding the rejection of Schultz’s application garnered 12,000 signatures. The internet howled its disgust. One typical comment, on the website of the Missoula Independent: “This a—hole wants to move because the mothers kill their young, basically it hurts his profits, f— him.”

When activists from California called his house to castigate him, he tried to point out that the loss of animal life was inherent to any farming operation. They didn’t listen. “They can be an animal rights person, that’s their opinion, that’s fine,” Schultz told me. “Just like I can have an opinion about them being a vegetarian.”

Several countries, including the United Kingdom, have responded to pressure from animal rights campaigners by passing complete or partial bans on fur farming. The U.S., however, has no such law—to the outrage of many activists. This spring, ski mask-wearing vandals destroyed breeding records at a bobcat farm in Ronan, Montana, though their attempts to free the cats were deterred. “Our motives were borne of a fierce love for wildlife,” the activists wrote in an email. (Whether bobcats that have been raised in captivity for generations qualify as wildlife is a question the email did not address.)

Schultz hasn’t yet experienced that kind of harassment, but his attempts to depart the Bakken have brought his once-anonymous business an unwelcome notoriety. (When I asked him if he would speak with me, his first question was, “Well, that depends—do you eat a hamburger once in a while?”) Attacking bobcat farms, however, isn’t likely to put a dent in international demand for furs. As long as there’s a market, fur farming — and trapping, currently experiencing a boom of its own—will persist.

Meanwhile, Montana Fish, Wildlife & Parks has been sifting through the snowdrift of letters and emails (the comment period closed August 29), though according to game warden Shawn Briggs, there’s no timetable for issuing a decision on Schultz’s application. For now, then, Larry and Carol are stuck in the Bakken. “We’re in the heart of it,” Schultz said. “We could stay and bitch about it. Or we could leave.”

Ben Goldfarb is a correspondent for High Country News.