So Large Its Currents Are Influenced By the Earth’s Rotation 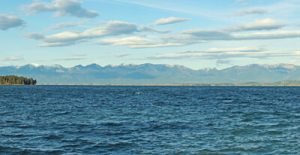 Flathead Lake is the largest natural freshwater lake in the western U.S. (excluding Alaska). Because of its size it is often more like an ocean than a lake. Those of you who have been out on its rough waters during a major wind storm can attest to this. In fact, Flathead Lake is so large that some of its water currents are influenced by the Earth’s rotation, termed the Coriolis effect, a phenomenon typically only seen in oceans.

When researching Flathead Lake, the University of Montana’s Flathead Lake Biological Station regularly borrows oceanographic research instruments and techniques. For example, our lake monitoring buoys and water quality profilers were originally designed for ocean use and were adapted for Flathead Lake by Woods Hole Oceanographic Institute. This cross-disciplinary benefit goes both ways, as oceanographers gain broader insights from the relatively contained nature of the “Flathead Ocean.”

Water movement in Flathead Lake is complex and driven by a suite of factors, including shape and orientation of the lake, timing and magnitude of stream inputs, wind speed and direction, water and air temperatures, and as mentioned earlier the earth’s rotation. Surface currents have been measured up to 2.3 mph. And a few years ago, Bio Station physical lake ecologist Mark Lorang and colleagues put an instrument on the bottom of the lake’s deepwater trench expec-ting to find very little water movement. Instead they recor-ded surprisingly fast currents of nearly 0.7 mph at 200 feet deep. This is about the same speed as the Flathead River where it enters the lake, but this deep current is roughly four times the width of the river and changes its north-south orientation as the wind changes direction. Just remarkable.

I personally can attest to the lake’s rapid water currents. As one of the Bio Station’s SCUBA divers, I regularly dive to maintain our monitoring buoys. I specifically recall one winter day where the surface was dead calm, glassy even, yet when we dropped to 30 feet – hand over hand along the north buoy’s mooring – there was a strong current causing our feet to “blow in the wind.” I felt like a flag holding onto the mooring cable, and, given the calm on the surface, this was entirely unexpected. Then, the same thing happened at the south buoy off Yellow Bay – but the current was in the opposite direction.

One general horizontal current is related to the input of the Flathead River at the lake’s north end. River water travels southward along the lake’s west shore, and then when it gets to the Narrows near the tip of Finley Point much of it continues back up the east shore instead of going through the gap into Polson Bay. This water movement is visible from space – satellite imagery detects the sediment plume during runoff as it progresses along this pathway. This current is responsible for much of the driftwood that accumu-lates in Woods Bay.

There are also vertical currents in Flathead Lake. When wind blows from shore onto the lake, it can push surface water away from the shoreline. This allows water from the deep dark bottom to upwell to the surface. This phenomenon is particularly noticeable during the summer, when warm surface water is replaced by cold water from the        deep. In Yellow Bay, I have seen (and felt!) 70-degree water replaced by 55-degree water in just a day of offshore wind. It certainly changes your swimming experience at the state park.

But I am a biologist. Why should I care about all of this physical stuff? Well the physical conditions are the template on which the biology is overlain. Resources are not evenly distributed throughout the lake (or oceans). Currents deliver nutrients and other needed materials. For example, nutrient-rich upwelling currents along the Pacific coast of Alaska and Chile drive highly productive foodwebs that support some of the world’s most diverse and lucrative fisheries.

Furthermore, currents can move the organisms themselves. Knowing how water and particles, including organisms, move around help biologists look for hotspots of ecological activity and production. Or in the case of a threat to our wonderful lake, studies of physical dynamics help us concentrate efforts looking for new aquatic invasive species. In short, understanding water movement in Flathead Lake can help us protect it.

Rick and Susie Graetz teach in the University of Montana   Department of Geography.

The lake is a remnant of the ancient, massive glacial dammed lake, Lake Missoula, of the era of the last interglacial. Flathead Lake is 27.3 miles long and up to 15.5 miles wide. Flathead Lake has a maximum depth of 370.7 feet and an average of 164.7 feet. This makes Flathead Lake deeper than the average depths of the Yellow Sea or the Persian Gulf. Polson Bay, at the lake’s outlet, was raised 10 feet by Kerr Dam. It is one of the cleanest lakes in the populated world for its size and type.