You are here: Home / Archived Stories / Deaths in Yellowstone Many and Gruesome

This spring the nation’s first national park opens its gates to the public for the 152nd consecutive year. Millions will flood its three main entrances from the four corners of the globe. Three times the size of Rhode Island, Yellowstone, like all national parks, was set aside so people could escape the hustle and bustle of everyday living. However, when entering these parks nature demands we pay attention. Despite warning pamphlets passed out to each visitor at the gates, many enter with a false sense of security. Far too many falsely believe that park wildlife are somehow tame (their have been at least two documented cases of parents actually setting their children on the backs of both a buffalo and a bear for photographs) and that the place is run like a city park where lawns are watered and mowed regularly and tree branches are picked up and carted away. In reality, national parks are places where nature and history are preserved intact, and intact nature includes dangers. This combination of naivety and bravado has too often resulted in tragic death. 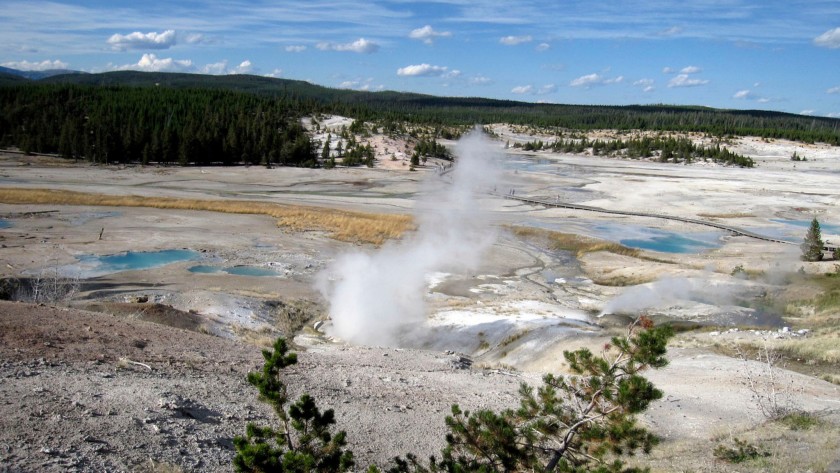 To date, Yellowstone has been host to well over 300 deaths that were not vehicle or snowmobile related. Their causes range from the ridiculous to the sublime. In other parks deaths have occurred in similar ways: falls, drowning, lightning, falling rock, etc. However, the nations first park offers a list of truly unique demises resulting from scoldings, bears, bison, and poisonous gasses, among others. The examples are both graphic and stark, as outlined in Lee Whittlesey’s Death in Yellowstone, Accidents and Foolhardiness in the First National Park.

Whittlesey, Yellowstone Nation-al Park’s Historian, offers many tragic and compelling accounts of park visitors meeting their end in the nation’s crown jewel. For example, in 1981, David Kirwan, age 24, and Ronald Ratliff, 25, drove into the park from California. They parked at the Fountain Paint Pot parking lot. While the men observed the hot springs, Ratliff’s Great Dane escaped from the vehicle and ran headlong into Celestine Pool (one of Yellowstone’s roughly 10,000 hot springs, geysers, mudpots, and steam vents). Kirwan approached the edge of the pool, and though bystanders warned him not to, he plunged into the 202 degree water head first in an attempt to save the dog. He reached the dog, then realized it was futile and swam back to shore where Ratliff helped pull him out. As they moved to the sidewalk, Kirwan managed to say, “That was stupid, how bad am I?” Another tourist, Earl Welch, tried to help Kirwan. He could see Kirwan’s entire body was badly burned as the skin was already peeling off. Welch was suddenly overwhelmed with the feeling that he was walking with a corpse. It seemed to Welch that Kirwan was blind, as his eyes were totally white. The man was rushed to a Salt Lake City hospital, where he died the next day. Meanwhile, Ratliff’s dog had disintegrated, with its fatty oils causing small eruptions in the hot springs for several days.

Whittlesey writes of an even more spectacular fate befalling Mr. and Mrs. Earl J. Dunn of Minneapolis in 1924 at the Grand Canyon of the Yellowstone. After taking in the panorama, the couple returned to their Ford Coupe. They were parked at a spot about 50 feet north of Grand View, and there Mr. Dunn apparently had difficulty turning the car around. Disaster struck instantly. Mrs. Dunn must have screamed when she realized he had backed them off the edge of the canyon. The car fell 100 feet, finally lodging at the foot of the ledge. The two bodies continued downward bouncing off numerous pinnacles and outcroppings, landing some 800 feet below. The recovered bodies were horribly mangled and bloodied, and the Ford was barely recognizable as a car.

Of a less gory nature was the death of Park Ranger and Naturalist Charles Phillips in 1927. Mr. Bauer was the winter keeper at Old Faithful that year. That April, Bauer went to the springs above the hotel to clean out the growing vegetation along the stream that emptied into the reservoir. He collected some roots of plants growing there, and took them to Phillips for identification. Phillips pronounced them fit to eat, thinking they were roots of the Camas plant eaten commonly by the Indians. So, the two men, and Mrs. Bauer, ate them sometime between 8 o’clock and 10 o’clock that evening. Phillips ate two of the roots, and the Bauers part of one root each. At about 2 o’clock in the morning both Bauers were struck by waves of nausea and vomiting that made them so sick they stayed indoors into the next night. Mrs. Bauer was practically a “raving maniac” until 4 o’clock in the morning, vomiting continually, and having convulsions just before daylight. Mr. Bauer had smothering spells and was intensely sick, but could not vomit. The next day, Bauer managed to tend to his chickens before he became ill with chills. Both Bauers rested until 1:00 p.m. and then broke out in cold sweats. Phillips normally visited the Bauers every night at 8 o’clock, to talk and listen to the radio. When he didn’t appear that night, Bauer crossed the several hundred yards of deep snow to the ranger station. He found the building dark and cold, and Ranger Phillips dead on the kitchen floor. The ranger had apparently died sometime during the previous night.

Phillips was lying on the floor, on his back, with one shoe untied and his clothes partly open. He apparently had his slippers with him during the attack because they were next to him on the floor. Investigators found he had apparently come out of the bedroom into the kitchen and fell forward striking his head above the left eye on the table. Dirt on his hands indicated he had crawled on the floor a while in total agony, and he exhibited the vomiting and frothing at the mouth characteristic of Hemlock poisoning.

Finally, Whittlesey brings us the unfortunate tale of Bill Nelson, a brand new park employee in 1939, who, just east of Tower Junction, succumbed to noxious fumes from poisonous gasses. At that time, it was the Bureau of Public Roads’ practice to dig a 26-foot deep pit, when building roads and bridges, to obtain information of the underlying ground formations before construction. On that day, Nelson and Earl Johnson lowered Vaughn Roley in a bucket into the test pit. Roley began noticing a sulphur odor as he reached the bottom, then got out of the bucket to study the cut-away soil. Hydrogen sulfide gas suddenly assaulted his throat and lungs, and hazed his vision, so he got back into the bucket and called the other two to pull him up. Roley, though, lost consciousness. He fell out of the bucket, caught and dangling from his foot. Seeing this, Nelson quickly slid down the rope attached to the bucket to help his co-worker. However, part way down Nelson was also overcome by the gasses, and fell to the bottom of the pit, where he lay face down. Meanwhile, Earl Johnson began operating the hoist and pulled Roley to the surface. Johnson later recalled, “Terrible yellow foam… coming out of Roley’s mouth and nose.” When Roley regained consciousness, Johnson ran to the Tower Ranger station for help. In the interim, Roley lost and regained consciousness. Meanwhile, Nelson lay motionless. Roley attempted to use the hoist rope as a lasso to catch Nelson in order to lift him to the surface, but failed. He was still trying when Johnson returned with Park Ranger Bugas and others.

Bugas had brought ropes, and used one to lower Gabby Johnson  into the pit (carrying the hoist rope to slip over Nelson’s feet). Unfortunately, Johnson was also overcome by the gasses, and was brought up unconscious. Finally, holding his breath, Roley was again lowered into the pit by the rope. At the bottom he was forced to take a breath, and felt himself passing out again. He managed to slip the rope around Nelson’s feet before blacking out. Both men were pulled to the surface. Nelson had been unconscious for 20 minutes. The hideous foam oozed from Nelson’s mouth and nose. Both were rushed to the hospital. Roley survived, but Nelson died the next day.

No one visits a national park expecting death or injury. Danger and wilderness, though, go hand in hand. Whittlesey’s compilation of real life accounts serves as a reminder of that fact, and as a caution to all who enter Yellowstone.

Note: In Lee Whittlesey’s Death in Yellowstone, Accidents and Foolhardiness in the First National Park,  readers will find numerous other accounts of people meeting a tragic fate. Published in 1995, with a recent second edition, the title is  available through local bookstores and Amazon.com.