You are here: Home / Archives for November 2010

Lincoln’s Weapons of War—Creating Montana, Vigilantes, and Gold BY JOHN C. FAZIO Previously, I have argued that the decisive battle of the Civil War was not Gettysburg, as so many assume (though its critical importance cannot be denied), but Spotsylvania and Grant’s literal turning south and east at the Chancellorsville Crossroads that preceded it after […]

Call Now, Because We Can’t Do This All Day BY DAVID S. LEWIS We’ve heard and read a lot lately about dangerous wildlife in the Rocky Mountain West (see page 16), and so here’s an idea whose time has come. Let’s say you’re hiking in the woods, or hunting. It’s a beautiful fall day, the […]

Let the Kid Do What He Does Best BY ROGER KOOPMAN The kid had eighteen cents. The benevolent bully had a buck-forty-nine. The kid went to the corner candy store, bought a licorice pipe and a jawbreaker for two cents. He was giving serious consideration to the chewable wax lips, when he overheard a big […]

Intrigue and Election Fraud From the Get Go BY GARY R. FORNEY It was October 24, 1864, and the sweet scent of democracy was in the crisp autumn air of Virginia City. Of course, it may have been a bit overpowered by the aroma of thousands of unwashed miners and thousands of horses, mules, and […] 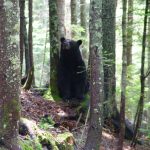 Bears Looking Into, From Bozeman to Yellowstone BY PAT HILL Whether it’s grizzlies in the backcountry or black bears in town, bruins have been capturing headlines and keeping animal control officials busy in southwestern Montana this year. Black bears always show up in Bozeman in early fall, packing on the calories in anticipation of a […]