You are here: Home / October 2016 / Cassidy Freeman Longs for Livingston

Netflix Star Thanks Montana For Her Opportunity 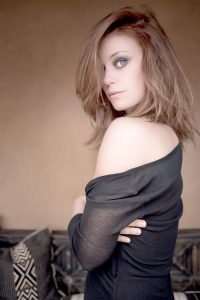 Cassidy Freeman first came to Livingston in 1982 and a part of her heart has been here ever since. Early memories are filled with working on the family ranch; moving cattle, training horses, irrigating and building what she calls the Freeman family fence. “It was the least straight fence ever made,” she tells me. “An early family affair.”

We met through friends and family a few years ago, and concretely bonded through a leadership summit of sorts called Hatch, an eclectic range of people together in collaboration, creatively striving to make the world a better place. Ever since, we’ve kept in close touch, supporting each other’s inspired endeavors, laughing as much as possible, and excavating any golden nuggets in both the ups and downs of existence. “Life,” we tell each other, “is the ultimate cliffhanger.”

Although we often find each other in various cities across the country, Cassidy visits Livingston as much as she can. We catch up over lunch at Marks, drinks at the Murray, or gab sessions in the kitchen of her family’s place. Sometimes we’ll hike and solve “all the world’s problems.”

I’m curious as to what she misses most when she heads back to Los Angeles. “I miss the seasons and nature. It’s easy to touch nature in Montana. I miss the river and moving water. I know the ocean moves but the river feels different. I miss knowing every time I go to town, I’ll see a friendly face. I’ve had my place in Los Angeles for 11 years and although I have friends in the neighborhood, I don’t even know the people that live to either side of me.”

Playing Cady Longmire, the stoic sheriff’s strong-willed,   idealistic daughter on the popular Longmire series (originally on A&E, then picked up by Netflix) reminds Cassidy of Livingston through the story lines that closely parallel life in a small western town. A lot of the drama of the stories circle around the fact that in a small town everyone knows everyone’s business. News travels fast when there’s not a lot of news.

For those unfamiliar with the books or television series, she describes  Longmire as a contemporary western about a sheriff who is a little stuck in the past and struggles to keep the peace in the modern world while grieving the death of his wife. The drama is set in fictional Absaroka County, Wyoming, but filmed in New Mexico.

“What I love most about the series is that the characters are human rather than good or bad, which is so much more relatable. In westerns, the ‘white hat versus black hat’ is the norm and Longmire shreds all those preconceptions. We all have this iconic cowboy image in our heads, the well intended man, doing right just because he should, or because everyone is watching. Walt Longmire is our cowboy, but it’s not so simple.”

The series is based on Wyoming author Craig Johnson’s novels of the same name. However, the episodes don’t necessarily follow the plots he’s written. I asked Cassidy to describe that creative process and the timing of the writing. How much does she know about her character, Cady Longmire, before she’s actually filming, where do the stories come from if they’re not coming from the books?

Cassidy explains, “The two mediums are so different in their style of story telling, it’s hard to cram an entire book into a single episode or stretch it out over ten. So we don’t follow the books but are in close contact with Craig Johnson. The producers often run story lines by him before committing them to a script. The writers of the show like to keep it current by researching crimes that have actually happened. They watch the news and read local small town papers. They might get inspired by something that happened in the book, but don’t directly follow how the plot plays out. Now there’re just more stories to go around.  However, Craig Johnson hasn’t stopped his storylines either. He releases about one new Walt Longmire novel every year.”

I asked her what makes Longmire’s crime drama different than most of the ones on television.

“Many crime shows revolve around a city, but there’re a lot of people in this world that don’t relate to that. The writers and producers do a great job revolving some of our storylines around the quirks of a small modern western town. We had an episode revolve around a woman who collected road kill as a job, a carcass being part of the mystery. That’s not a common profession in Los Angeles, not really a “city” profession. There’s also quite a bit of hunting and poaching involved in our stories. I don’t know anyone here (in L.A.) who actually owns a gun. I particularly love that we shed light on Native American concerns that the rest of the world doesn’t hear about. There is so much revision of laws concerning Native Americans that we never even get the chance to know about.  Some of these laws would shock you. Our producers search this information out and make it part of the plot. I find that courageous and important.”

Curious, I question further, “How much do you know about what happens to your character when you start filming?”

“Not a lot,” she tells me. “We have meetings before the season starts called ‘arc meetings’ where they tell us our character’s emotional arc throughout the season, but specifics come to light during the filming and writing process, they’re writing as the shoot is happening.…Typically I get the script about a week before we shoot it, but we all have to be really flexible. It keeps it exciting!”

Where do you place your energy when Longmire Season 5 has finished production?

“I took a few weeks to come home to Livingston and spend time with my Dad and nature. An actors life is always full of finding the next gig, meaning auditions and meetings. But I try to keep developing and producing things with my creative peers as well. It keeps the ideas flowing. I’m currently developing a television show with my brother Clark that we’re real excited about. I can’t tell you much more than that, but it’s been so fun working with him as a creative partner.

I’ve also been working with a team of friends on our independent film Cortez. We shot Cortez in Taos, New Mexico, August of 2015, and have since edited and shaped it up for festival submissions. I think of this film as a child…watching it form and grow and now seeing where I can send it off to ‘college.’  The festival world has changed dramatically in the last 10 years, and strategy is very important. We are premiering at the Houston Film Festival in collaboration with AFI this November and are so excited by how much they loved the film. Our director Cheryl Nichols is nominated for a directors award and will be sitting on a panel of Female Directors at the Festival.”

From what I remember through all our conversations before filming and periscope fundraising adventures, Cortez was a pretty female driven project, no?

“Every department besides our camera department was headed by a woman on Cortez. That is kind of unheard of.  There’s nothing wrong with male artists…some of the best filmmakers I’ve worked with happen to be men, but I think the scales are still so unfairly tipped and the number of incredible female directors and designers out there struggling just to be seen is incredible. What an untapped resource. We were so happy to find some amazing collaborators on Cortez, of both genders…but so many ended up being female. Myself included. Our director Cheryl gave me an incredible compliment recently. She said as a producer, that I was flexible and open to change, while at the same time being firmly in charge and that it gave her a safe environment to be creative. I think being a woman helps with those qualities.”

What else helps you in the many hats you wear in this business?

“Remembering what’s important. And only I know what that means for me. I think so many people, in every profession, live their lives by old standards or the standards of someone else…when the only person who knows what matters to me is me. When you don’t get a job you really want, it’s hard. But you have to be pissed for an hour, and then let it go. My mom used to say, why get your panties in a twist about shit you can’t control?  She’s right.”

“Longmire is an interesting ride. We have survived a long time in an unpredictable and quickly changing time in television. Our story is so linked with what technology and accessibility is doing to television today. A&E dropped our show claiming our viewership was too old of a demographic, only to then be picked up by Netflix, arguably the most successful new media network to date. I continue to learn that nothing is guaranteed, in this business and beyond. I’m grateful for this journey…but I know I was in part chosen to play Cady Longmire because this world felt just like home to me. I have to thank Montana for this opportunity.”

Season 5 of Longmire premieres on Netflix Friday September 23, with all 10 episodes available at once. And for the record, Cassidy has not seen any of season 5. She’ll be watching the first episode on September 23 along with the rest of us.

“Will you binge watch it?”

“Are you nervous about it?”

Audrey Hall’s career in the creative arts includes feature, commercial, documentary, book and editorial projects for a wide variety of national and international clients. Follow @audreyhall photo on Instagram. Contact her through audreyhall.com.