You are here: Home / Archived Stories / Can a Bottle of Wine Sink a Political Campaign?

If So, We’re All in Big Trouble 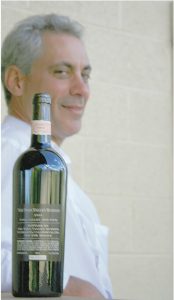 Not long ago, we reported that a Montana Pioneer photo taken in 2010 was purchased by the Chicago Tribune. The photo revealed then White House Chief of Staff Rahm Emanuel (now Mayor of Chicago) and private equity manager Bruce Rauner (now running for governor of Illinois) strolling down the bucolic path to what is now the Yellowstone Valley Grill, twelve miles south of Livingston, as a late summer sun cast long shadows upon that curious evening. Presently, that photo and the national story it sparked figures into a high stakes Illinois political campaign.

Considering their party affiliations and close ties, Emanuel, a Democrat, and Rauner, a Republican, have made strange bedfellows. Rauner tapped Emanuel to broker high-end mergers and acquisitions for GTCR, Rauner’s then private equity firm (after Emanuel left the Clinton White House). Rahm’s brief stint in the real world reportedly lined his pockets with $16 million, and with the two repeatedly vacationing together in Paradise Valley, Chicago news media speculated as to who Emanuel, a Democrat, would support for governor—Republican Rauner or Democrat Pat Quinn. As a Democrat, Rahm is obliged to support Quinn, but his support has been tepid, and his criticism of Rauner muted. That made for a story, hence the demand for our photo of the two vacationing together in Montana.

Four years after Emanuel threatened that this photographer would be “in big trouble” if he disseminated another shot of him taken that same evening (see top right), a photo plastered on the Montana Pioneer’s September 2010 front cover (hard copy and online), the plot thickened, at least according to Chicago media.

After the Tribune recently contacted us about the story they were developing on Emanuel and Rauner, a significant “issue” emerged within one of the photos related to Illinois and national politics—the class warfare angle. Both Emanuel and Rauner carried bottles of wine that night, captured in the photo, to be enjoyed with dinner at the scenic YVG along the Yellowstone. In the midst of a hastily planned restaurant review, conceived the moment we knew Emanuel was in attendance, our close up shot of Rahm, as it happened, captured both the president’s right hand man and the label on his bottle of wine. That label, however, proved illegible, not that that was of any importance at the time.

The Chicago Tribune, though, took time to decipher the text of the label, which revealed the wine to have been the product of the Napa Valley Reserve, an invitation-only culinary and wine club requiring a $140,000 membership.

Emanuel’s people denied the wine belonged to Rahm when quizzed by the Tribune, which soon discovered Rauner on the club’s roster. Likely, he actually owns the underlying real estate, but he did not have much to say about it when asked at a September press conference. All this nonsense was the result of our photo, mind you—looks like we’re in big trouble then, many times over, as you will soon see.

The Chicago Tribune (and others) noted this so-called “$140,000” bottle of wine, placing the photo on the front page of its Friday, Aug. 29, online edition, and also on the front page of its Sunday, Aug. 31, hard copy edition (see above). The Tribune story dealt with the photo, the wine, this publication and its restaurant reviewer (whence the wine bottle revelation originated), and extensively with the relationship between Emanuel and Rauner. 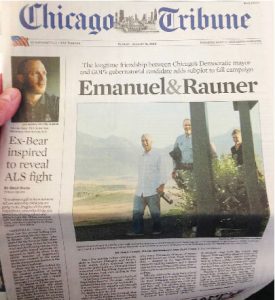 The Chicago Sun Times, seeing the photo on their rival’s front page, also purchased rights to the image(as did ABC News) and published it along with a story centered on Rauner’s expensive tastes:“Talk of Rauner’s pricey wine club—which exploded on social media—came on the same day that Gov. Pat Quinn [Rauner’s opponent] was telling reporters he had eaten graham crackers for dinner in a quest to live on the minimum wage…for one week,” wrote Chicago Sun Times reporter Natasha Korecki, with our “wine photo” hovering above her words as if it were a smoking gun. As with the Tribune, Korecki also brought the Montana Pioneer into the story, after having called us, digging for details.

With all the buzz, including social media, other major newspapers picked up the narrative of rich guy Rauner running for governor, hanging out with a high level Democrat, and enjoying expensive wine, while the masses of Illinois suffer in degrading poverty, or some such line. Some version of that story ran in USA Today, the Washington Post, Bloomberg News, even a British alcohol publication. Then, just before our October deadline, TIME magazine contacted us about the photo.

Rauner found himself characterized as a man who pays more for wine than most Illinoisans make in a year (never mind he’s an owner of the club), while his opponent vowed to live on minimum wage for an entire week eating crackers, as he pandered to lower income earners. So, the media shilled for Quinn, the Democrat (surprise) and used our photo of Rauner (a Republican) and his wine as a symbol of wealth and privilege, effectively making him the bad guy (reflected, by the way, in a sudden reversal in the polls), even as they promoted the campaign talking point that Quinn mows his own lawn with an antiquated lawn mower, portraying him as a regular guy (our next photo should be of Quinn’s Guatemalan gardener, but he’s probably been sent home until after the election.)

Rauner having portrayed himself as a sportsman and a guy who wears $18 wrist watches, the media saw their class profiling as relevant (in fairness, the Tribune wrote a broader story). The theatrics related to the issue, though, instruct us as to what passes for reality in politics, journalism and public discourse these days, and about the relish with which wedges are driven between people who might otherwise see themselves as fellow Americans.

Yes, Rauner is an extremely wealthy man. He can afford expensive wine and real estate, but he also invests in and co-chairs a charter school (as a former Chairman of the Chicago Public Education Fund), education being an interest, likely a passion, that he shares with Emanuel (to Rahm’s credit), as both men seem to be committed to remedying the abuse heaped upon children and future generations by Illinois teachers unions.

All this may seem far afield from Montana, but we hear such sentiments (the Bolshevik variety) regularly on the streets of Bozeman and Livingston (rarely in the counties). The point is, success is demonized, as a knee jerk reaction, with disregard for the hard work and managerial ability it requires, and the tactic rather than being insightful is just one more toxic way to divide people. Further, in what light do we hold JFK, FDR, Washington, Jefferson—none of whom even earned their wealth? So how valid is the anti-success wedge?

We don’t know much about Bruce Rauner, but believe that as our neighbor he ought to be given a fair shake. Especially when the wealthiest and most corruptible entity of all, government, seems so often to get a complete pass. The potential problem, though, is that great wealth (in or out of government) can remove a person from “ordinary” life, people, and communi-ties (see One Percenters Shaft Liv-ingston, Montana Pioneer, Sept. 2014), but so do a lot of other things, including the cynicism, exploitation and demagoguery that come with careers in politics, often ironically referred to as public service.

What’s most despicable is panderers exploiting those on the lower economic rungs to get elected, and then, when elected, fostering policies to keep them there and dependent on elected officials (while pitting them against successful people, to stay in office, and all in the name of public service). Investment and business creation, on the other hand, produce employment, higher standards of living, opportunities for better lives (proven economics), something pandering has never done and never will.

One last barely related item before this piece turns into a rant—what does a “$140,000” bottle of wine taste like? Haven’t a clue, but willing to find out. Honestly, we’d like to experience the sensation of such a vintage swirling about the oral cavity then gurgling down the esophagus over some steak tartare and vichyssoise. Can’t imagine it, and can’t afford it, unless the Tribune publishes that photo another one-hundred and thirty-nine times (do the algebra). And, by the way, we have no paparazzis on the payroll (can’t even spell the word). The media contacted us (not the other way around) in their incessant effort to portray business people as bad. And we declined TIME’s offer for the photo. The experience though is still worthy of a toast. Napa Valley Reserve might send a bottle over for review, something full bodied with a nice finish—the editor can’t afford expensive wine, but he can drink it.