Bears Looking Into, From Bozeman to Yellowstone

Whether it’s grizzlies in the backcountry or black bears in town, bruins have been capturing headlines and keeping animal control officials busy in southwestern Montana this year. 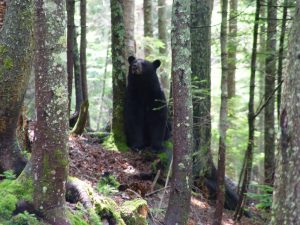 Black bears always show up in Bozeman in early fall, packing on the calories in anticipation of a long winter’s nap. They usually make appearances on the south side of the city, following Sourdough (Bozeman) Creek out of the mountains and often hanging out in the Spring Creek area. The south end of the Galligator Trail, a popular walking/biking path that runs from the northeast side of Bozeman nearly all the way to Montana State University, runs right through the wooded and watery Spring Creek ground, and in the fall bears also use the trail as an easy route out of the woods and into the bordering alleys and streets on Bozeman’s southeast side.
A few of the Bozeman bears have reportedly even figured out the city’s garbage pick-up schedule, venturing within a few blocks of downtown Bozeman in their search for garbage, birdseed, apples and other goodies.

“They hit our trash last night,” one resident along South Willson Avenue told the Pioneer on garbage pick-up day in the neighborhood. The garbage-gathering bears were keeping trash pick-up crews scrambling and animal control officials on their toes as late summer moved into autumn. A man a block east on Tracy Avenue recounted seeing a bear moving down the street at a rapid pace one morning, eluding the animal control officials from Montana Fish Wildlife and Parks who were in the neighborhood attempting to corral the bear. One Friday, for several hours, another black bear hung out behind a State Liquor Store on East Main Street, that features the slogan “Da Bears” in a television ad, before wandering into the wetlands in back of the business.

Though black bear sightings are not unusual in Bozeman during autumn, bear activity seems to have started earlier than usual this year, and the bears seem a bit bolder. The Bozeman Daily Chronicle’s ever-popular Police Reports began listing bear encounters and incidents earlier and more frequently than in years past, and bears began hitting homes outside of town months ago. One stubborn black bear tried to take up permanent residence at Jennifer Clifford’s home in Bridger Canyon in late July.

“He wouldn’t leave the porch,” she said. “When it came to the point where we couldn’t shoo him away, I knew it was time for him to go.” Clifford said that after FWP officials removed the problem bear, another tried to take up residence, but finally gave up the fight and moved on.

Residents on the west slope of the Bridger Mountains north of Bozeman have also reported “bears in the yard” earlier than usual this year. A late huckleberry and chokecherry season in the mountains may have pushed bears into the valleys, but bear numbers also seem to be up.

When it comes to Yellowstone Park’s grizzlies, that’s official. There are more grizzly bears in the greater Yellowstone ecosystem than there have been in many years, according to scientists studying grizzly populations there. The official count of 603 grizzlies this summer is three times what it was in 1975, when grizzly bear hunting was outlawed and the bruins were placed on the endangered species list.
“Our population is strong, our counts of females are high,” Chuck Schwartz, a U.S. Geological Survey scientist who heads the Interagency Grizzly Bear Study Team, told the Associated Press. The Interagency Grizzly Bear Study Team is responsible for monitoring Yellowstone’s grizzlies. Officials estimate that between 2004 and 2008, the area inhabited by Yellowstone grizzlies expanded 34 percent, to more than 22,000 square miles. That increase in territory has created a number of “hot spots” for conflicts, including around Gardiner, West Yellowstone, and along the North Fork and South Fork of the Shoshone River west of Cody, Wyoming.

Yellowstone grizzlies began hitting the headlines in a deadly manner by June, when a 430-pound adult male grizzly that had recently been released by Interagency Grizzly Bear Study Team members attacked Erwin Frank Evert, a 70-year-old botanist from Illinois. Evert was hiking on a trail in the Cody area when the fatal attack took place. The incident marked the first human death from a grizzly in the Park since 1986, when a photographer got too close to a female griz in Yellowstone’s Hayden Valley and paid the ultimate price for his shot.

In late July, another deadly griz attack took place near Cooke City, Montana, at the Soda Butte Campground. A grizzly sow and her three cubs ripped through the campground in the early morning hours of July 28, killing one person and injuring two others.

“There were three separate attacks in three separate campsites, which is unusual,” Ron Aasheim, spokesman for the Montana Department of Fish, Wildlife and Parks, told the AP. The campground was shut down until the grizzly family was captured within days of the incident.

The adult grizzly that killed Evert and the sow who led her cubs on the deadly rampage through Soda Butte Campground were both destroyed, and the cubs were relocated to ZooMontana in Billings.

Two more grizzly attacks took place in the Gravelly Mountains of southwest Montana within a week of each other in late September, as bow-hunters hit the hills in search of prey. One bow-hunter was attacked and mauled by a griz, surviving with a broken forearm and a cut head, and days later, another bow-hunter was attacked by a female grizzly bear with two cubs. That hunter was bitten on the inner thigh after being knocked to the ground by the sow. Hunters may be more prone to grizzly bear attacks because not only are hunters putting themselves in the bear’s ecosystem, but gut piles from successful kills also attract the bears.

As the general big game season opened up near the end of October, another deadly incident between a grizzly and a hunter was reported to authorities in Wyoming on Oct. 27. The hunter reported that he was attacked by a grizzly that he shot and killed in self-defense. The man, whose identity remains unknown while the incident is under investigation, suffered lacerations to his leg.

Though it’s not official until the investigation is complete, this latest grizzly bear death would make 46 grizzlies killed or removed from the wild this year, and that number could be as high as 62, according to wildlife officials. But that’s not expected to have much effect on the grizzly population overall, and as human populations and activities increase in the more remote areas of Montana, like the Greater Yellowstone ecosystem, encounters with bears both black and grizzly will inevitably increase as well.