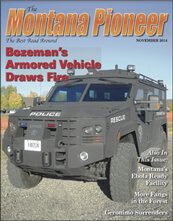 The acquisition of a Ballistic Engineered Armored Response Counter Attack Truck, or BearCat, by the Bozeman Police Department, has raised controversy, concern and speculation on several fronts in this southwest Montana city.

Though a grant application for the vehicle was submitted over a year ago (in October 2013) and the Bozeman police department has had possession of the BearCat since May, Mayor Jeff Krauss told the Montana Pioneer on Oct. 21 that he did not know the city even had the rig until September. Neither did the other four members of the Bozeman City Commission.

“I learned about the BearCat on Facebook [in late September],” Krauss said. “My immediate reaction was, How could I have missed that?” As Krauss looked further into the matter, he could not find any information on the BearCat in the city’s Capital Improvement Plan (CIP), which he said should contain any items with a price tag of over ten thousand dollars. Though funded through a federal grant, the BearCat costs totaled over $253,000. He further realized that the matter had never been put on the city commission agenda for consent in any form. City Manager Chris Kukulski signed the federal grant application for the city on Oct. 13, 2013, something Kukulski has claimed that he “really believed” the commission had okayed.

“Two processes were skipped, not just one,” Krauss said. “Something we swear to uphold—all of us, from the city commissioners to the police—is the City Charter. That’s a big deal to me. So on Friday (Sept. 26), I put the matter on the commission’s agenda for the next committee meeting.” The aim of the discussion for the following commission meeting, on Oct. 6, was whether to retro-actively approve Kukulski’s approval of the grant application and acceptance of the vehicle, or send the BearCat packing.

By Sept. 26, the community of Bozeman had also become quite aware of the presence of the vehicle in their town. Facebook entered the fray again, with a page dedicated to sending the vehicle back, which quickly became quite busy with users offering up their own opinions. Anticipation was that the commission meeting on Oct. 6 would be a lively affair with a packed house. Those anticipations did not go unfulfilled.

On Monday evening, Oct. 6, more than a hundred people attended that commission meeting at City Hall, a meeting that lasted from 6:00 p.m. until well after 10:00 p.m. Several citizens spoke in support of the BearCat, as did police, firefighters, paramedics, the Gallatin County Sheriff, and the County Attorney. But most of the public comment was not favorable to the BearCat, something that Mayor Krauss told the Pioneer “was across the spectrum politically.”

“These were just concerned people,” the Mayor said, “basically telling us that ‘this [the BearCat] doesn’t represent the town we know.’ I found it interesting that the old guard as well as young people were telling us that they are wondering about the militarization of the police.” And after media coverage of events like last summer’s incidents in Ferguson, Missouri, where police faced off with a public angry over a young man’s death after a shooting incident with a police officer (and where BearCats were deployed for crowd control), people across the United States are indeed wondering why their police departments are obtaining such militaristic tools.

Along with performing damage control regarding the process of obtaining the vehicle, Bozeman Police Chief Ron Price sought to quell fears regarding any use or misuse of Bozeman’s BearCat as he spoke during the commission meeting.

“It was my belief we had put it on consent. I was incorrect,” Price said. “But failure to [properly follow the process] does not negate the need. This is clearly a defensive resource.” The chief specifically stated that the BearCat would not be used for crowd control purposes.

“I’m very proud of our officers,” the Chief said. “I should provide them with every opportunity to make them safe.” But he apologized for the failure to make sure proper procedure was followed, adding that the possible return of the BearCat could put those officers, and others, at risk, should the need for its use arise.

“That was not my intent,” Price said, adding that he realized there was a “significant [negative] perception to overcome regarding the BearCat in the community.”

Much of that negative perception surfaced during the public comment period that followed. Comments included accusations of a secret deal, violations of due process of law, and feelings of trust between the police and the public vanishing.

“I never thought I’d see tyranny in Bozeman,” stated one person during her time at the podium. “But this is it.” Complaints didn’t just stem from the seemingly questionable method used in obtaining the BearCat. Language in the original grant application was the basis for some of the fear and opposition. The grant application claims that “Southwest Montana is home to several anti-government and/or radical groups such as militia groups, environmental groups, outlaw motor-cycle gangs, religious and racial hate groups.” That language in particular seemed to spark much controversy regarding the grant application, as citizens questioned the presence of such groups in southwest Montana.

“It [the original grant language] was inartfully stated,” Price acknowledged during the meeting. Commissioner Cynthia Andrus also stated that “making sweeping statements about groups is just wrong. I apologize for that…”

“The grant language for need [of the BearCat] and the language of need used during the commission meeting don’t match up,” Krauss told the Pioneer. “The language in the grant divides people. As if the militia is so scary that we need an armored vehicle.”

William Wolf, a local militia member who took the podium, told commission members that the vehicle would not protect the police from a determined militia anyway.

“The militia is here,” Wolf acknowledged. “And until they [the police] can police themselves as hard as they police us, don’t give them that vehicle.”

Support for the armored vehicle was unwavering among law enforcement officials on hand for the meeting. Gallatin County Sheriff Brian Gootkin probably summed up their feelings best. He said he “did not hesitate” to sign off on the BearCat. “Did we make it without [the BearCat]?” he asked. “Yes. I’m sure glad we did.” But the sheriff added that he’s glad the vehicle is now available should it be needed.

“Our business is the safety of the community,” Gootkin said. “I hope you will not place procedure above the mission. Don’t vote away safety equipment.”

When the time came to count the votes, the commission meeting had been underway for well over four hours. The motion to retroactively ratify Kukulski’s signature on the grant application and acceptance documents passed 4-1, with Krauss casting the only dissenting vote. Commissioner Carson Taylor, who takes over the Mayor’s duties from Krauss in 2016, said he was approaching his decision “as though it were 2013.”

“I’m not willing to take [the BearCat] away,” Taylor said. “When police feel safe, they make better decisions. I don’t think the character of our community will change one iota.” Commissioner Chris Mehl also voted to keep the vehicle.

“Bozeman is not the community it was 20 or 30 years ago,” he said. “But we really screwed up. I’m sorry we did not do right by you [the community]…we cannot forget how easy it is to lose the trust of the community. We need to rebuild that trust. But I lean toward keeping it.”

Commissioner Cynthia Andrus said that though the vehicle “brings up images of Ferguson…we should keep it.” Andrus added that the commission “would not tolerate” any misuse of the BearCat.

“Today I changed my mind,” said Commissioner I-Ho Pomeroy, who was leaning toward a ‘no’ vote. She said that testimony from spouses of Bozeman police officers who endorsed the vehicle to help keep officers and others safe sealed the deal for her.

Mayor Krauss looked at the bigger picture when casting his ‘no’ vote, saying that the way the BearCat was acquired was “not just an error in paperwork.”

“I’m frustrated with what I’m hearing,” Krauss said. “To protect representative government is my primary responsibility. I take that seriously. I’m concerned about the militarization of the police in this country. I hear what the families are saying…I hear what the Chief is saying.” But Krauss stressed that the language in the grant application itself “is the language of militarization.”

“That is not an error in paperwork,” he said. “We can’t let the grant process overrule the democratic process. I’m voting no on this motion. We need to restore [public] faith first.”

In the wake of the commission’s retroactive approval of the BearCat, the Bozeman Police Department and the Gallatin County Sheriff’s Department have a new protocol on paper regarding the vehicle. Bozeman Police Department’s Special Response Team leader, Captain Steve Crawford, provided the Pioneer with a copy of the new protocol on Oct. 20. It states that the “BearCat armored rescue vehicle will only be used in high risk incidents that require the activation of the city-county Special Response Team (SRT).” This includes hostage, armed barricade, sniper, and other potentially deadly situations, such as high-risk apprehensions or warrant service. The BearCat may also be used in VIP personal protection details, or “other situations exceeding the capabilities of respon-ding patrol officers or deputies.” The protocol also states that the BearCat is a “defensive resource” that is prohibited from use in any form of crowd control or other non-emergent police activities. Its stated use during a callout “will be in situations requiring armored protection of citi-zens, evacuation of citizens, and/or protection of law enforcement/medical personnel.” The call on when and whether to use the vehicle will rest with the command personnel associated with the SRT.

“I’ve been shot at five times since joining the SRT in 1997,” Crawford told the Pioneer. “With this [BearCat] we can respond more safely for us and the individual [or individuals] we are responding to. We can evacuate citizens in a danger area with more safety. Safety resolves incidents more reliably.”

Crawford also sought to reassure the people of Bozeman regarding what he sees as a good relationship between the police and the community.